Wright Cox began his banking career in 1980 and was promoted to leadership roles throughout his career. He has been with BankTennessee since it was founded in 1992. Recognized by Memphis Magazine as a tenured Power Player in banking, Wright has been a key contributor to the success of the bank while helping his many customers achieve their goals.

An avid supporter for education throughout his career, he was first elected as a board member for the Collierville Municipal School System in 2013 and re-elected in 2016 and 2020. Wright was elected chairman of the board in 2020. During his first term, the board was tasked to establish a new school system and the construction of a new high school for the Town of Collierville. The high school is the largest in Tennessee with almost 500,000 square feet and will accommodate 3,000 students.

He is a past president and a founding board member for the Collierville Education Foundation . He also formerly served as a board member for Crichton College. Mr. Cox is a recipient of the C.H. Harrell Education Award, which is presented annually to an individual who goes above and beyond to support education in Collierville. 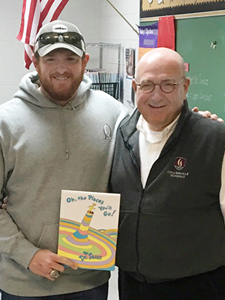 Mr. Cox is a graduate of the Rhodes College Executive Leadership Program, the Louisiana State University School of Banking and Texas Christian University.

While his career and the community are important to him, Wright Cox’s first love is his family. He is married to Cindy McDonald Cox. They have three grown children: Morgan, wife Lauren Cox; Genna, husband Fred Vann; and Wright, wife Charlotte. Morgan and Lauren have two boys Daniel and Jonah. Genna and Fred have a daughter Lucy. Wright and Charlotte have a son Smith.

(Wright Cox and his son Morgan Cox read to school children at Crosswind Elementary for Read Across America Day on March 2, 2017.)

Stroll down memory lane with Wright as he celebrates 25 years at BankTennessee.